An isolated existence in a cage deprives cats of the opportunity to engage in the most natural feline behaviors – behaviors that are essential to help them cope with the stress inherent in shelter living.

Resting, stretching and hiding (and low-level perching) may be possible if the cage is sufficiently large and enriched. However, running, jumping, climbing and perching aloft are impossible – or severely restricted – even in the more spacious cages and condos recommended today.

In addition to the availability of choices, a group room affords cats a sense of control over their environment, thus eliminating a major source of stress for sheltered cats.

Soft, washable bedding should be provided for each cat. Try to allow for at least one more bed, box or comfortable napping spot than you have cats.

A litter box for each cat is ideal, but at least one for every two cats or three kittens is workable. Litter boxes should be strategically placed so no cat can prevent the others from using one, meaning they should be scattered throughout the room instead of collected in one central place. Be sure to monitor carefully to ensure that every cat is using litter boxes regularly.

Litter box locations are important, since cats feel particularly vulnerable while using them. Some cats find security in privacy, so place some boxes out of view of most of the room. Place litter boxes to allow an escape route so cats are not cornered or trapped. Generally this will work better than covered boxes, which are not recommended in a group setting.

Food and water should be separated from litter boxes by a physical barrier or a space of three feet. A set of food and water bowls for each cat is preferred. A set for every two or three cats can suffice, but be especially alert to guarding behavior and ensure that every cat is getting sufficient food and water. Spread food/water stations throughout the room to maximize access.

All furnishings (bedding, litter boxes, food and water, hiding places, perches, toys and other enrichment items) should be sufficient in number and placement so every cat has access. 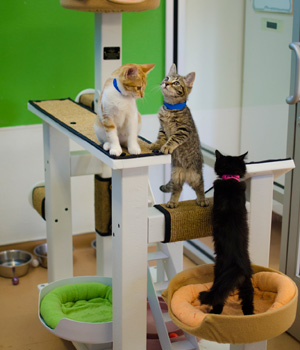 Group housing works because it allows cats to engage in their natural behaviors – hiding, running, climbing, jumping, elevated perching and scratching. Structures of some sort are essential to these activities and to the success of the group room. Available types include prefabricated, custom-made, homemade and makeshift (plastic chairs or cubes, cardboard boxes). They can be affixed, built-in or mobile.

Hiding places should be easily available and numerous, since hiding is perhaps the most important way that cats avoid or cope with stress.

Perches and resting places – some with hiding opportunities – should outnumber the cats in the room. Remember, each cat needs control over his or her environment by having a choice of options. Hiding and perches/resting places should be spread throughout the room so cats need not cross the path of other cats to get to one.

Jumping and climbing opportunities – such as catwalks, ramps and steps – should be easily available.

Non-porous material that can be disinfected should be used for any structure that is built-in or otherwise immobile (due to weight or size, for example). In the event of illness in the room, all contents that cannot be disinfected must be removed and discarded. Removal of contents that cannot be sanitized is advisable whenever disinfecting is necessary – such as before a new group of cats is housed in a room. Failure to do so increases the risk of illness.

Vertical space should be maximized through the use of elevated structures. That increases the space each cat has to establish a personal territory/buffer zone, each cat’s ability to engage in natural behavior and control his or her own environment.

Scratching is also an important natural behavior and ample scratching opportunities, both vertical and horizontal, should be available. 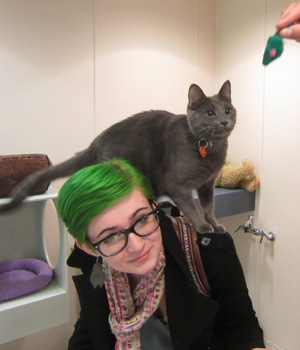 Changes to a cat’s environment are significant sources of stress, and introducing a cat into a shelter constitutes a drastic and traumatic change that can produce enormous stress. It’s important to reintroduce consistency and regularity into the cat’s everyday life and routine as soon and as fully as possible.

Regular schedules should be established and followed strictly. This includes feeding time, play sessions, cleaning, and other routinely performed tasks involving group housing. Each task should be performed at the same time each day. According to one study, housed cats organized their daily activity patterns around human caretaker activity.

Face time with people is crucial. The opportunity to socialize with other cats, while important, is not an adequate substitute for interaction with people. Studies show that cats value such interaction, preferring human contact to toys for stimulation. It also appears that group-housed cats become less socialized to people when they are not given regular individual human attention. In contrast, cats receiving additional handling sessions with a familiar person were willing to be held longer by strangers (i.e. potential adopters) than cats not receiving the extra sessions. Quality time can take multiple forms and the choice is best left up to the cats, because preferences will vary according to personality, age, and mood.  Appropriate forms of human interaction include:

The degree and nature of human contact a given cat prefers depends on its socialization to people and involves genetics, early rearing conditions, and life experiences. Caretakers should be careful not to force interaction on a cat. The cat must be allowed to approach and dictate the level of physical contact it desires. Signs that interaction is welcomed include:

Each cat should have the opportunity to receive individual attention without interference or involvement of other cats. Sometimes this means using a socialization room that is separate from the group room. Remember that cats are very much like people; they may have a preference for one activity one day, and another the next.

Play-based interaction should be designed to provide daily exercise and to allow the cat to engage in pseudo-predatory behavior. Toys, such as feathers attached to a rod, that provide an opportunity to chase, pounce, and “capture” are generally favored by cats and provide the greatest therapeutic value.

There is little conclusive evidence regarding the effectiveness of sensory enrichment, so these methods should be used to supplement, rather than replace, other methods.

There is ample anecdotal evidence that cats are drawn to windows that provide views of human or animal activity. In contrast, there is scant evidence suggesting that a television screen holds the same attraction to cats in general. Nevertheless, some shelters use television screens to provide some visual stimulation to cats.

If you choose to try visual enrichment via televisions or other media, be aware that the shelter is already a very stimulating environment and adding some types of visual stimulation may do more harm than good. Experiment carefully and monitor the results to see how the cats are responding.

Many sounds are known to cause stress in cats. Less is known about what sounds may be pleasant for cats. Some shelters play soft music in group rooms or throughout the facility. There is not much evidence that music improves the welfare of its listeners, but playing soft music has not been proven to cause harm. Music might also serve to mask stressful sounds in the shelter.

Be mindful, though, that cats can hear frequencies we cannot hear. Some sounds might be disturbing or painful to them even though they seem pleasant to us. Just as it is critical that cats experience periods of dark to maintain normal circadian rhythms, they must also have periods of quiet, so do not leave music playing 24 hours a day.

Also, be mindful that noise made by caretakers and visitors may be jarring to cats, so make a conscious effect to keep noise down.

Putting aside pheromones, catnip is the only scent to which cats are proven to react favorably. Catnip can promote play and activity, but has not been empirically shown to facilitate adaption to new environments, as is sometimes claimed. Because catnip can make cats aggressive and unpredictable, it should be used under close supervision. Its utility is somewhat limited by the fact that susceptibility to catnip is a genetic trait and roughly one third of the species is immune to its allure.

Lavender leads the list of other scents claimed to confer a benefit, along with valerian and honeysuckle.

Scientific evidence is lacking, but use of these other scents cannot hurt and may help. As with other sensory enhancements, it is reasonable to experiment with scents as an enhancement and make your own judgment.

A final note: Be mindful of the effects that residual cigarette smoke, perfumes, or other scented personal products may have on cats. Recall the last time you were in an elevator with a liberally scented individual and spare the cats that trauma.

The jury is still out on pheromones, but there is no evidence that their use is harmful. The studies supporting the use of artificial pheromones to promote adaption to new environments or ease transition into a group are largely confined to those sponsored by manufacturers of products. Independent studies following acceptable protocols have neither proved nor disproved claims of effectiveness.

Pheromones have staunch advocates among animal health experts, particularly in the United Kingdom and Canada. There is also a large body of anecdotal evidence of the effectiveness of artificial pheromones for treating behavior problems and soothing owned cats.

Discussions regarding subtle environmental sensory enrichment strategies for shelter cats are continually evolving, and some will no doubt be scientifically confirmed. However, they are not a substitute for providing sheltered cats control over their environment by creating multiple opportunities to engage in any of the full range of natural species behaviors.